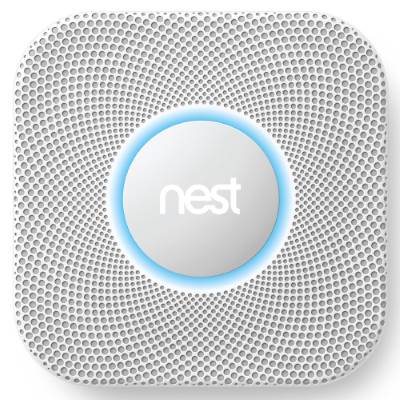 The Nest Protect combined Smoke & Carbon Monoxide alarm is one of the most expensive options on the market and usually sells for double the amount of its main rival, the Kidde P3010K - this can really add up when you consider you're going to need at least several detectors to cover your entire home.

Despite the higher cost, Nest does add a few extra features that might make it worthwhile for your home, or you may simply prefer the aesthetics because in my opinion it's far more pleasing on the eye than all the others.

Alerts sent to your phone

It's main distinguishing feature is that when you connect it to your home's WiFi system which is connected to the internet, it will send alerts to your phone or tablet wherever you are. These alerts can range from telling you that it is detecting smoke or carbon monoxide, or it can be a self-diagnosis report telling you there's something wrong with the unit or that the batteries simply need replacing.

It speaks to you

Although not entirely unique to Nest, it also talks and tells you what the nature of any detection situation is. For example it can tell you that it has detected dangerous levels of carbon monoxide and tell you which room the detection has been made in if you have multiple units.

As well as detecting smoke and CO it also contains a heat and a humidity sensor. These additional sensors allow it to take in more information and make more intelligent decisions about whether there is a real fire danger or that you've just left something cooking for too long - this should lead to fewer false alarms (See 'Cons' below).

It also has two ultrasonic sensors to detect movement and an occupancy sensor which detects when you're walking under the detector at night and it turns on a small light so you can see your way around - you can control this behavior through settings.

Coordinates with the Nest Thermostat

In an emergency situation the smoke and CO detector can send information to your Nest thermostat so it can shut down things like your gas furnace thereby removing a possible source of dangerous CO gas. The additional sensory information can even be used by the thermostat to get a better idea of when you're home or away in order to regulate temperatures better and reduce the running costs of your HVAC system.

In my opinion, apart from the ability to turn off a gas furnace in an emergency if you also have the Nest Thermostat, the Nest Protect is overpriced in terms of important functionality. I much prefer the lower cost Kidde P3010K which also has a 10 year built in battery which lasts the entire life of the unit.

On the other hand I do accept that some people are willing to pay the extra and it may prove to be worth it if you already have the Nest Thermostat as well - that one time when it does shut down the furnace could be a life-saver.

Click here to purchase the Nest Protect from Amazon in either the 120v wired or battery only version.

Please ensure you have enough alarms to protect your entire home - more than one are needed in the vast majority of dwellings - see Places within the home where CO Detectors must be installed.

CO is the chemical symbol for Carbon Monoxide.